Why on Earth did we buy an almost 45-year-old recreational vehicle anyway?

This original introductory ad from 1973 says it all: 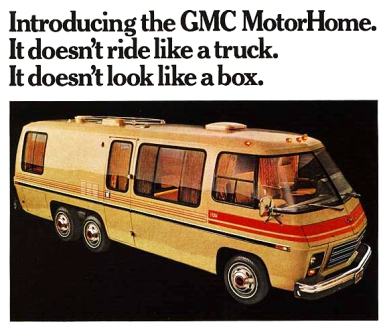 Most mass-produced RVs all look the same. Same boxy shape, same swirly paint schemes. In fact, most are constructed the same way as well: a company that specializes in building the house-portion of the vehicle purchases a chassis from a truck manufacturer, and simply slaps a rectangular dwelling section on top of it.

Because they are built in this way, most do not last very long either: the average RV lifespan is 5 to 10 years, with the exceptional few lasting up to 20. Yet, our 1973 GMC MotorHome – our Vanabus – will be 45 years old this July!

How is this possible? The GMC MotorHome is the only complete motorhome to ever be built by a major automobile manufacturer. The MotorHome is to GMC what the Corvette is to Chevrolet, both subsidiaries of the same parent company: General Motors.

Chevy built cars; GMC built trucks. When Chevy first introduced the Corvette in 1953, the brand’s reputation was that of practicality. The Corvette changed everything, casting a halo across the entire brand. Pouring all of their engineering prowess and extra company resources into the development of the Corvette resulted in all Chevys becoming more desirable by association.

GMC, the large-vehicle-sister-brand of Chevrolet, set out to do something similar with the MotorHome. The end result is one of the most highly engineered recreational vehicles to ever exist. It drives like a car, barely takes up two parking spaces, feels larger than it should be on the inside, has windows everywhere, and looks dope AF.

There are too many really sweet design details to mention even half of them, but my favorite is its legendary American muscle car legacy. The engine and drivetrain come right off the 455 cubic inch, front-wheel-driven Oldsmobile Toronado.

There is an undeniable allure to classic muscle cars. Their sound, their size, their power. These cars were eminently workable, being great for DIYers and shade tree mechanics. Most of today’s vehicles require enormous effort just to remove a set of spark plugs from the engine, whereas the automobiles of yore were designed with maintenance accessibility in mind.

The cult status of muscle cars and their devoted fan base means that there are ample aftermarket parts available today from a wide variety of manufacturers. Because the engine in our Vanabus comes straight from the Toronado, replacement parts are really easy to find, despite the vehicle’s age.

Now, the 455 Rocket that was once pulling a car that was less than half as heavy as the MotorHome is won’t move quite like a muscle car, but the Vanabus has still got some pep. She’ll trudge up a steep hill at 40 mph, but on downhills and flats, she’s a monster.

In fact, at Speedweek 2016, a GMC MotorHome broke 122 mph at the Bonneville Salt Flats, setting a new record for a recreational vehicle of this size.

It was the EM-50 Urban Assault Vehicle in the comedy classic, “Stripes.”

It was even the basis for the Barbie Star Traveler MotorHome. 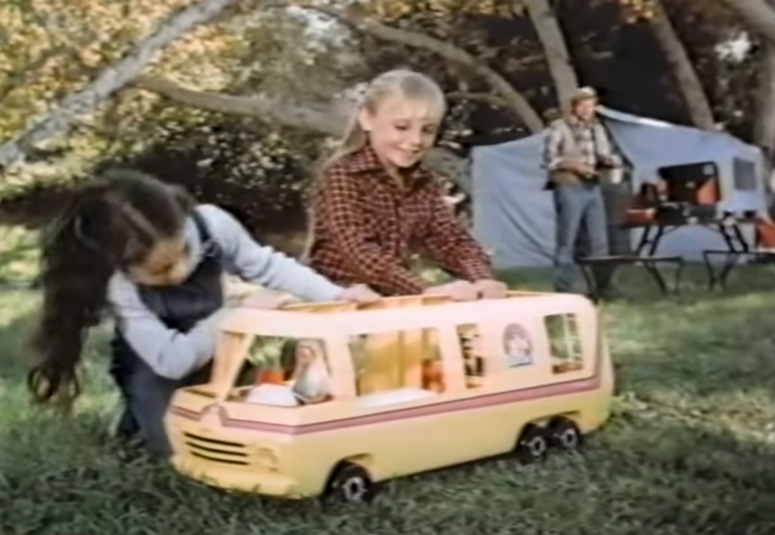 In short, there is no other RV quite like our Vanabus. We didn’t even truly start considering #vanlife as a real option for us until we discovered that they existed. It’s been over 3,000 miles, and of course it hasn’t been perfect, but it’s been one awesome ride.